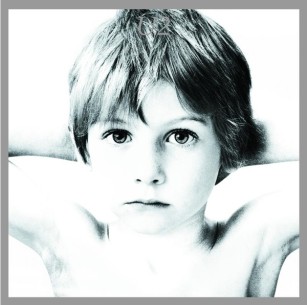 There was a time when U2 weren’t the megastars they are now, and Bono wasn’t dancing around for music player adverts, in a way not too dissimilar to your dad at weddings. The year is 1980. Margaret Thatcher has been in power for just over a year. The threat of nuclear war and mutually assured destruction for everyone wasn’t just the foray of action-RPG games. And a peculiarly named band from Ireland have just released their debut album on the heels of their first international single ’11 O’Clock Tick Tock’, a rather formulaic and forgettable song that betrays none of the quality of the album in question, simply named Boy.

The central theme of the whole album is one of youth and growing up, concepts that are instantly relatable to everyone, making this perhaps the easiest U2 album for anyone to jump straight into. From song names such as ‘Story for Boys’ and lyrics like ‘A boy tries hard to be man/His mother takes him by his hand’, the album has a clear and concise focus that rings true in every song. One area of criticism arises from Bono’s almost borderline obsession with vocal echo; almost every song on the album features some kind of echo which, whilst effective in the earlier songs, does begin to grate slightly as the album progresses. Nonetheless, the album is a sterling effort, from start to finish.

From the opening song, you are hooked. ‘I Will Follow’ has, and will remain, one of U2’s best songs in its 30 or so year history, and a testament of how high the band can soar in terms of musical genius. The single’s video (imbedded below) is nothing to shout home about, but has a rough’n’ready quality that is hard not to ignore (that, and the look on Bono’s face – priceless!). The song’s passion and energy, both in terms of the drums and guitar and lyrically, continue into the sophomore offering, ‘Twilight’, offering up some of the album’s best guitar solos.

Things slow down when it comes to ‘An Cat Dubh’, a much more darker and mellow offering, a different kettle of fish altogether, but not lacking in substance as a result. Gritty and chilling (especially the Chorus, and when Bono says ‘She-cat!’). The listener is then slowly guided ‘Into the Heart’. A slow guitar solo guides us into the lyrics: ‘Into the heart of a child/ I stay a while/I can go back’, poignant, but uncompromisingly true to the albums focal point.

‘Out of Control’ gets us make onto familiar ground, with a much more upbeat, hopeful tune in a similar vein to ‘I Will Follow’, with some pretty neat guitar solos breaking up the choruses. There’s a lot of echo going on in this song as well. ‘Stories For Boys’ is another impressive single-contender, and featured as a B-Side on the band’s first EP, Three. It’s hard not to see why it features here, as it is a fast-paced, lyrically strong effort, showing off Larry Mullen Jr’s finesse on percussion.

‘The Ocean’ acts an effective, yet haunting, interlude before moving into ‘A Day Without Me’, which has arguably the best intro of any song on the album. Lyrically, the album once agains makes allusions to growing up and leaving home: ‘Look from the outside/To the world I left behind.’ Simplistic, but something, I think, we can all relate to. I don’t necessarily agree with the decision to make it the lead single from the album, but it’s still a great song.

‘Another Time, Another Place’ picks up the pace once again, with a nice, steady beat seeing us through. This should of been a single; lyrically competent, killer hook and a passionate and effective end, in which Bono appears to revert to Gaelic and possibly German. The passion is there, without a doubt, and that’s what counts. ‘The Electric Co.’ is up there with the some of the album’s best songs, and this is the song where you can really hear Bono come through in the singing.

The album’s final offering, ‘Shadows and Tall Trees’, lacks the energy of the album’s earlier song’s, opting for a more mellow and sedate construction. A worthy finish, and one that leaves you hungry for more.

Although the album lacks the visceral intensity and sheer brilliance of U2’s third album, War, Boy is still rated highly in U2’s past discography, for good reason. ‘I Will Follow’ is still on of U2’s best singles, albeit a entirely different pedigree from ‘With or Without You’, and you get an incredible sense of clarity of purpose in the album’s entire construction. With a passionate, albeit borderline preachy, focus throughout and a full consideration for each individual’s song’s constituent parts, Boy stands as an example as to how artists should approach their first album and start a legacy that will not soon be forgotten.

Error: Twitter did not respond. Please wait a few minutes and refresh this page.

Check out these great blogs